(Please spread the word on social media! Thank you!)

That’s why I developed the “Family Vomit Protocol” that I use in MY family to keep the chaos (and the body fluids…) under control, reduce discomfort, and (hopefully!) shorten the illness when someone has a seriously upset stomach.

One of the tools in my Vomit Protocol Toolkit is Activated Charcoal…I don’t use it all the time, but it’s helpful for those times when the vomiting Just. Won’t. Stop. It’s also easy to find at your local grocery store, is affordable, and has multiple uses (such as DIY face masks, and Homemade Tooth Powder).

In fact, the last time I had a Stomach Bug (while 6 months pregnant, no less…), I took one every 2 hours during the first night. The activated charcoal eased the nausea enough that I was able to fall asleep and get some much needed rest in between doses.

As an adult, it’s easy to swallow a pill…but what do you do when you need your kids to take some?

That’s where “Black Juice” comes in.

(*Note: This post may contain affiliate links, which means I might receive a commission, at no extra cost to you, if you make a purchase using those links*)

My experience using Activated Charcoal with my kids to stop vomiting

A few weeks ago, my 6-yo woke us up to tell us he had puked…3 times no less. (Zero of them in the toilet or a puke bucket, FYI…) Usually when this happens, I immediately start my Family Vomit Protocol, and the kids have been able to start drinking water again within a few hours without puking.

By the next morning, my poor boy was still not able to keep any water down. He would even puke after sucking on a single ice cube! When this pattern continued until mid-afternoon, about 15-hours after the first vomiting episode began, I started getting concerned.

That’s when one of the Mamas in our Mommy Plus More Insiders FB Group asked me if Activated Charcoal actually worked for Stomach Bugs (and linked to this article where she had originally read about it). Now to be honest, I had heard of using Activated Charcoal for GI issues…but had never actually tried it for myself yet.

I happened to have some already for when I make Homemade tooth powder and DIY face masks, so I pulled it out, made some “Black Juice”, and hoped my 6-yo would drink it without puking. He drank it with a good attitude, said it wasn’t bad, and that it tasted like “Apple juice with flour in it.”

I full expected him to puke black charcoal onto my carpet within 15-minutes.

To my surprise, he was like a completely different child 15-minutes later! He didn’t puke, and his energy suddenly returned. He went from laying on the middle of the living room floor trying to sleep, to roughhousing upstairs with his siblings.

I still made him carry the puke bowl around with him, though. Just in case.

Now it wasn’t a miracle cure.

He still puked one more time that day. By the time dinner rolled around, I was letting him eat unlimited applesauce (per my Family Puke Protocol…), and some of it unexpectedly came back up in the middle of his third bowl. I immediately put an end to applesauce for the evening, but that last vomit episode didn’t slow him down a bit.

He continued to feel well and energetic until bedtime, and was perfectly fine the next morning (even though he tried asking for more applesauce…I made him eat his usual morning oatmeal, instead).

And so the Activated Charcoal became a permanent part of my Family Puke Protocol…I hope it works for you too!!

(But really…I hope you never need it!) 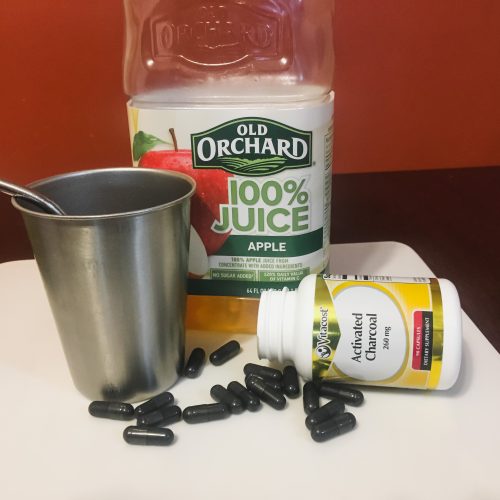 “Black Juice” Recipe (For when the puking just won’t stop…)

When you can't get your child to stop puking due to a run-of-the-mill stomach bug, and early steps of the Family Puke Protocol are taking waaaay too long…Mix up some Black Juice and stop that puke in it's tracks!
Print Recipe Pin Recipe
Course Home Remedy

(Please spread the word on social media! Thank you!)

Being a Mommy is awesome, and I wouldn’t trade it for anything…but at the end of the day, my real name is not Mommy. And my real life involves more than just my kids…which is best for them, necessary for my husband, and absolutely required for me! Click to learn more..